Still working on my screenplay short. It’s harder than it looks. You watch a movie and, if you’re like most people, you don’t really think about the writing, you think about the acting. At least I did, when I said, “Hey, I bet I could write a screenplay.” Famous last words.

For one thing, you’ve only got about 120 pages to work with. Or work within. Why 120? The rule of thumb is one minute of film per page. So a “standard” two-hour movie (120 minutes) would run the same number of pages. These days, it’s actually about 90. Again, sounds a lot easier than writing 300 pages of fiction. Ay, there’s the rub.

Writers, well, me at least, spend a lot of time with descriptions and inner dialogues, moods, tone, all that “writer stuff.” We don’t just write, “The boy hit the ball.” Sure, that may be all that happens, but that whole “show don’t tell” rule comes into play, and we spend paragraphs describing the boy, the ball and the hitting. Some writers spend pages.

In a screenplay, however, you have to convey all that description on the screen. Yes, you want to know that the boy has a mop of hair and a sprinkling of freckles across the bridge of his nose that look like gingerbread crumbs tossed onto a sandy beach, but you don’t have room for all that. So you’re back to “The boy hit the ball,” but you still have to convey all that action, mood, tone, etc. This excerpt from “Die Hard” will give you an example. 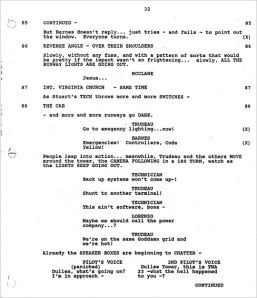 Ever heard, “Yeah, I saw the movie. Didn’t do the book justice.”? That’s partly the reason why. It’s nearly impossible to simply move a book, in its original form, to the screen. It has to be adapted, and in the adapting, a lot of the nuance goes away. I’ve only seen a couple of instances of this. In college, I had to watch a film adaptation of “Wise Blood,” which was just that. The book on screen. Not that exciting. I’ve also watched an adaptation of Faulkner’s “Barn Burning” a short story developed into a 45-minute (or so) short starring a very young Tommy Lee Jones. My next goal is to find a good version “Of Mice and Men,” which has been called the only novel ever written that could be brought to the stage without changing a word.

But back to the screenplay. Within those 120 pages, you basically have a three-act play, so if you slept through all those Shakespeare classes in high school, not only will you have missed the “Hamlet” reference above, but you’ll have to relearn the essence of playwriting. And most movies are strictly three acts — Quentin Tarantino flicks being an exception. Act I is the “Set Up,” Act II is the “Conflict” and the third act is the “Resolution.” And if you really pay attention to the time the next time you watch a movie, you’ll see the movie shift along these lines. If the movie is 90 minutes, the first 30 will be a place-setter, then you’ll see the move shift into Act II, and so on. Of course, knowing this nearly ruined movie watching for me, because now I’m always waiting for the acts to transition.

That’s the basics. The format, scene descriptions and transitions, etc., are a whole different matter. I’ve mentioned the format before, but I always tend to overdescribe everything, and end up going back and slashing unnecessary junk and trying to drill down to the scene itself and what really matters. That’s what I’m doing now.