Full Disclosure: I haven’t read Rum Diary. But I do want to see the movie.

This piece in the today’s Los Angeles Times is interesting – and insightful. 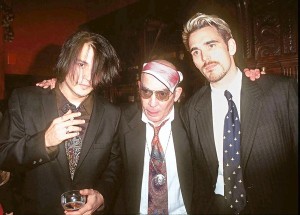 Hunter S. Thompson was an unusual writer to say the least, but one of his most unusual traits was that he became the persona he created. More accurately, he became a caricature of the persona he created.  This, incidentally, was the topic of a discussion this week with a colleague – was HST really that effed up all the time? My colleague leaned toward the belief that Thompson was constantly under the influence and that affected his writing. My contention is no – nobody that high/stoned/wasted could keep it together long enough to write as brilliantly as HST did. It was part of the act — part of the fun of reading Thompson was that you were never really sure where the truth ended and the bullshit began. Or vice versa. And that – at first, anyway – was part of the larger-than-life,take-no-prisoners, paranoid, violent, Fight The Man persona he created.

But Thompson didn’t just create that character, like any writer does. He actually became that character and, ultimately, a cartoon version (literally, in Doonesbury). 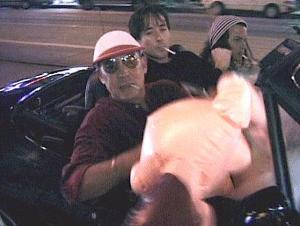 Much the same way an actor plays a role, then becomes that role. Maybe that explains HST’s many acquaintances who were actors. He understood them in a way that most writers don’t. Still, it seems to be an odd association  — Thompson spent a great deal of time castigating the very image that Hollywood evokes. Then again, Thompson was a man of many contradictions. (In case you’re wondering at the photo at left, that’s Thompson holding the blow-up doll, an obviously bombed John Cusack in the middle and Johnny Depp behind the wheel, presumably driving. And that’s all the details I have.)

Maybe the contradictions caught up with him over time. I agree with the Times writer (and my colleague) that,toward the last decade (or so) of Thompson’s career, the writing still had that razor’s edge quality to it, but only as stand-alone pieces. He was all over the map thematically. As the reporter noted, Songs of the Doomed reads like a man trying to catch up with (or, in the typically inverted world of HST) or run from the monolithic image of himself. The book’s cover alone speaks to that image (see below).

Yes, that’s Thompson aiming a .44 Magnum revolver at his typewriter. In the snow. Post your favorite HST book, article or witticism in the Comments section. Personally, I love The Curse of Lono.