This is probably going to generate some hate amongst my non-Southern acquaintances, but I’ve always been a little curious about the word “Yankee.” Not the New York Yankees (no, that’s a different kind of hate), just the word itself. I’ve been overseas enough to have been called a “Yank” numerous times, and found it a little offensive — and not just because I’m from Mississippi. It’s the way the word is used, the tone. Oh, and it’s usually proceeded by an adjective that begins with the letter “F.” That might have something to do with it.

But the word to me has always referred to someone “from up north.” As in, north of Carolina. Of course, it could generally be applied to anyone from outside the South, which in my Deep South case meant anyone not from Mississippi, Alabama, Georgia, Tennessee and the Carolinas. Ok, we’ll take Arkansas, too. Florida? Hell, there’s more Yankees in Florida now than before the Civil War. Louisiana? Loads of Cajuns, their own special breed. Texas? Hell, no. Texas is Texas. I know Virginia was the capital of the Confederacy and blah blah blah, but you ever hear them people talk? (Full disclosure: I now live in Virginia).

And of course when you grow up in The Real Deep South, “yankees” is always preceded by the word “damn.” The old joke, “I was 16 years old before I realized ‘damn yankees’ was two words,” rings true in my case. I always thought it should be the New York DamnYankees (still do, for that matter, but that’s another story).

Anyway, I’ve always wondered where the word comes from. I know it’s been around forever. I even remember an old TV show from my childhood days called “The Young Rebels.” The show was about a group of young people who were part of the “Patriot Movement” during the Revolutionary War era. Of course, these rebels were referred to by the British characters as Yankees or Yanks. Talk about confusing to a kid in the South who grew up knowing the words “Rebels” and “Yankees.” I can remember wondering, “What exactly is a Yankee anyway?” I think I even commented to my mom, while watching an episode, “Why are these guys called ‘rebels’? They’re a bunch of Yankees!”

Thanks to the magic of the interwebs, we don’t have to wonder anymore. Seems the word has Dutch roots, depending on what source you believe. The Dutch names Jan and Kees were common in the New York, Connecticut and New Jersey areas during Colonial times, and the two sometimes were combined into a single name, Jan-Kees.  Since Jan is pronuounced Yahn, it makes sense. I’m sure that one of those Jan Kees was referred to as “that damn Jan Kees.” 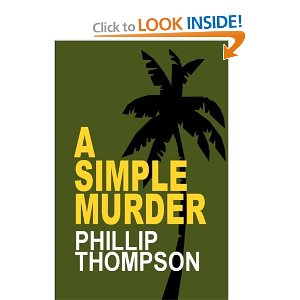 And don’t forget to get your Christmas shopping done — which should include giving a copy of A Simple Murder to the reader in your family. This reader loved it: “I loved Enemy Within, the author’s previous book. This one is part two of the first one. Now if they could only make TV shows and movies with as compelling of a story line! Outstanding!” Get your own copy here.