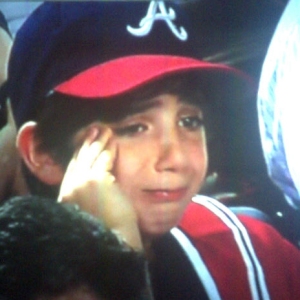 This story on Yahoo today made me laugh. Who knew there were a Top 5 Miserable Sports Cities? Sure, you say that phrase and I immediately think of … Buffalo, the Bills being the only team in NFL to go to four Super Bowls in a row – and lose all four. That’s pretty miserable.

But I’m a Saints fan, so to be honest, I also cringe a little every time I hear a phrase like that. But the Forbes gurus who compiled this list (yeah, I know: Forbes?) factor in a whole lot more than decades of “Aints,” bags on the head, Bum Phillips and Ricky Wiliams. And they came up with these top 5 most miserable sports cities:

You won’t get much argument out of me on any of these. As much as I love San Diego, as a sports town, it ain’t much. The Padres have managed to just go 1-8 in World Series games. The Chargers got blown out by the 49ers (49-26) in their only Super Bowl appearance. The Clippers left town for L.A. At least they have great weather.

Phoenix took the pig that was the St. Louis Cardinals and put enough lipstick on it to go to a Super Bowl with a quarterback who would turn out to be the prototype for a quarterback (whose name I’ll not write) who would later play for the Denver Broncos. The Diamondbacks have fared a little better, beating the Yankees in one of the most exciting World Series in recent memory, but in the end, we’re still talking about Phoenix. Arizona.

Buffalo. Between football and hockey, Buffalo has produced … yeah. At least they have snow.

Seattle (Mariners, the ones owned by Nintendo) traded A. Rod and Randy Johnson. ‘Nuff said. And they have terrible weather. And the Seahawks.

Which brings us to Atlanta. Like I said, I’m a Saints fan, so I have to chuckle to know that the home of the Falcons is considered to be a miserable place, something I’ve suspected my whole life. But it’s not just the Falcons, the Braves are also a huge contributor to the misery, which suits me just fine – I’m a Dodgers fan. And for years, I’ve been saying Braves fans are spoiled and fickle (and they are). The Braves don’t even sell out their playoff games. And every year, the ESPN airheads start gabbing about the NL East and how the Braves are poised to take it all, and then. They. Fall. Short. Like the Chargers. I’ve grown tired of the Braves, partly because of the omnipresent TBS (and an atrocious TV crew) but mostly because I’m tired of seeing a team in the playoffs that’s going to fold at some point.

BREAKING NEWS: Davy Jones, lead singer of “The Monkees,” died today at 66. I had no idea he was only 66. I watched “The Monkees” TV show when I was, like, 6. I thought he was a lot older, frankly. If you never had the pleasure, check out this video, courtesy of YouTube. And, this classic piece of Americana, which I’m sure was considered TV gold at the time – Davy Jones appears on “The Brady Bunch.” It was always Marcia, Marcia, Marcia.