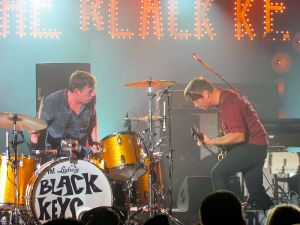 If the decade that was the ’70s hadn’t sucked, it would have sounded like the Black Keys.

I got a chance to see the duo from Akron at the Verizon Center in D.C. last night, and  I can say without fear of retribution that rock and roll is most definitely not dead. — although after nearly an hour of the warm-up act, the Arctic Monkeys, I had my doubts.

Yes, the Keys are a hipster band, and no, I’m not exactly in their demographic — full disclosure: I’m old enough that whenever I walk into an arena for a rock concert, I still expect the whole building to smell like weed.  But that’s part of what made the evening so interesting. I started listening the Black Keys a few years ago, when Brothers came out, courtesy of a friend who, being a few years younger than me, was a little more in touch with this fresh sound.

The first cut I ever listened to was “Ten Cent Pistol,” and I was immediately intrigued. And after listening to the next cut, “Sinister Kid,” I was hooked. Even though it was perfectly produced, there was a ragged, raw, basic sound to it. And, similar to the band they’re usually initially (and wrongly) compared to, The White Stripes, it’s just two guys — a guitar and a drum kit.

Their latest record, El Camino (which I wrote about here), was on full display last night. And, as I mentioned before, the music on this record reminds me of a Tarantino soundtrack — a “grindhouse” B-movie from the 1970s. In fact, listening to all their music, I’m always reminded of the ’70s. Or maybe an idealized memory of ’70s rock.

But what is a hint in the studio is a full-blown power salute in a live show. And they’re not merely ripping off old music. The Black Keys have captured the essence of what was good from that era — all the bombast and guts of Led Zeppelin, The Who, The Clash, Cream, Grand Funk Railroad, even T. Rex and ZZ Top — re-tuned it and made it their own. They took the power trio concept and stripped it down to a power duo. The result is no-shit rock and roll: loud, thumping and full of attitude. Jimmy Page would be proud.

But probably the most interesting thing (to me anyway) was that probably half of the people in the crowd last night were born after any of the aforementioned bands were grinding it out on the American music scene. I bet they wouldn’t even have known who Jimmy Page (or Joe Strummer, for that matter) is. But they were clearly into this “new” sound. I mean, in a very hip way, of course.

Best show I’ve ever seen? No, it wasn’t. But it was one of the most refreshing nights of music I’ve witnessed in a long time. And it’s nice to know that, as Neil Young told us, rock and roll will never die.

Spring break is coming…so stock up on your reading. Get a copy of the Hawaii murder mystery, A Simple Murder at Amazon.