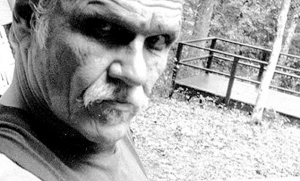 Sometime during my four years at Ole Miss, while studying journalism and the Marine Corps and doing damn little writing, I came into possession of several hard-cover books that I’d never heard of but thought, Hey, this might be interesting. One of those, Harry Crews’ superb memoir, A Childhood: The Biography of a Place, lay unread for years. I packed it up and moved it, several times, from Mississippi to Virginia to Oklahoma to California and Hawaii and back again. Somewhere along the line (while aboard the Missouri, I think), I read it. At the time, I didn’t relate to it that much — it’s hard to relate to the kind of poverty and desolation Crews describes — but as I grew older, I came to appreciate Crews’ writing more and more.

I haven’t read everything the man ever wrote, but what I have read (mostly his pieces for Esquire and Playboy) were certainly original. Crews wrote like no one else, save — possibly — Larry Brown. Right down to the bone. Unflinching, brutal honesty to the point of the bizarre. But Harry never apologized for who or what he was — redneck, Marine, Southerner, raconteur. In the New York Times obit today, he’s quoted as saying:

“To critics who taxed him with sensationalism, Mr. Crews — a plainspoken ex-Marine, ex-boxer, ex-bouncer and ex-barker — replied, in effect, that it took decadence to lampoon decadence. His actual replies are largely unprintable.”

Yea, verily. And he did it better than anybody. And in the redneck noir world, he stands alone. Like Flannery O’Connor and Brown, Crews wrote of the violence peculiar to the Southern culture — and like both of those writers, that violence was rarely gratuitous in Crews’ work. Breathtaking, yes; pointless, never. I consider O’Connor and Brown influences of my own, but Harry Crews is like the Rosetta Stone of modern Southern fiction.

Ten bucks says he punches Mr. Death in the mouth when they meet.