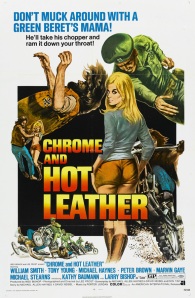 Just finished watching Chrome and Hot Leather. This thing is straight out of the drive-in. Released in 1971, it stars stuntman Michael Haynes and a young, musclebound William Smith. Who’s William Smith? He made a living on Falcon Crest in the late ’70s, but I remember him as the badass Spetznaz commander in Red Dawn.

It also stars Miss Ohio 1969, Kathy Baumann, who rocks the tight T-shirt — and in one scene, doesn’t.

The story is this: Special Forces SFC “Mitch” Mitchell (the late Tony Young) is training troops for Vietnam when his fiancee — played by a Cheryl Ladd so young you won’t recognize her — is killed in an auto accident at the hands of an outlaw motorcycle club. When Mitch hears of this, he takes three Army buddies, one of whom is played by Marvin Gaye (WTF?), teaches them how to ride Kawasaki motorcycles (“I was pretty good rider once,” he says) and leads them in the hunt for this “gang.” And deliver some Special Forces justice.

It’s a terrible movie. The acting — especially Young’s — is so bad I’ll be kind and just call it gross overacting. The only real excitement comes from the bikes — Harley Sportsters chopped in a variety of styles — and the guys riding them. I don’t know if they were real MC members or stuntmen, but given Haynes’ appearance in the movie, I’m guessing the latter. Haynes himself puts on a damn fine display of handling a bike at high speed on an open highway (this, back in the day before CGI, mind you).

I figure the film tried to capitalize on society’s fascination at the time with the outlaw motorcycle club phenomenon. And like most of the films at the time, it fails. It’s full of biker cliches — the old ladies, tough talk about the road, scruffy goofball riders and a ton of homoeroticism (not that there’s anything wrong with that). These bikers are part hippies, part homeless, and part fabulous. And speaking of homoeroticism, Haynes’ character bears an uncanny resemblance to Ben Stiller’s in Starsky and Hutch. See for yourself. That’s Haynes on the left, Stiller on the right:

The military characters fare no better. Stiff, boring and ill-fit in their uniforms, they pull out all the cliches Hollywood could muster: the jargon, the “green berets,” the “I’m in the Army so I’m naturally skilled in all forms of warfare — with a karate chop.” And, apparently, Special Forces justice involves a lot of karate chops.

Mercifully, at only 91 minutes, I didn’t have to suffer long. 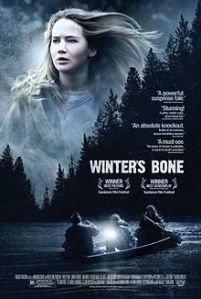 Last night’s feature was much better — Winter’s Bone. Yeah, Jennifer Lawrence is all the rage now because of The Hunger Games, but her performance in Winter’s Bone is jaw-dropping. This movie was recommended by an Arkansas friend of mine (thanks Darren), and, boy, does it pack a punch. It’s set dead in the middle of the abject poverty of the deep Ozark Mountains in southern Arkansas. Lawrence plays Ree, a 17-year-old girls raising her brother and sister because her meth-cooker dad has disappeared and her shut-in mother suffers from a debilitating “sickness.”  When Ree learns that her dad was arrested and put his house and land up as his bond — then disappeared before his court date, thus forfeiting the family home — she sets off to find him and save her home, meager as it is. This is not a typical “searching for daddy” story. Ree has to navigate her own family tree of cousins, family loyalties, violence and deceit to learn the truth about what has become of her father. It’s not pretty when she does. To say anymore here would ruin the movie, so you’ll just have to watch it for yourself. But the story is gripping, ruthless and captivating.