It’s been a busy month or so. Mostly in a good way, with a chance to return to my roots for a couple of weeks and spend some much-needed time with Southern friends, family and food.

There were several highlights – actually, I could call the whole two weeks in Mississippi a highlight. Besides being back in the place that I call home and my real inspiration to write (next novel Deep Blood is set in Lowndes County — check out the link at the top of the page), the first Thompson Cuzapalooza took place, with nearly all of said cousins in attendance. We could have fed a small Central American country with the amount of food brought in (Ed’s “Pigg Shack” barbecue from Tuscaloosa being the centerpiece of the feast) and we spent hours under the same roof laughing and telling stories (including a side-splitting telling of The Redneck Christmas Throw-Down by brother-sister team Edward and Terrie) and smiling at the kids playing in the sprinkler in the front yard. When we did go outside, it was to practice our 2nd Amendment rights right there in the back yard. Every male in the house (and one female) was carrying a gun, so it was merely a matter of setting up targets and letting the trash talk begin. Mind you, this was no irresponsible busting of caps. There were four military-trained shooters (myself included) on the firing line. Proper firearm safety was practiced at all times and no alcohol was involved. I won’t say who the best shot was, but he has been known to write about things in a blog. There are photos of the shootout, but as I’m relying on a teenage nephew to produce them, we may see them by 2025 or so.

Speaking of nephews, I got to spend some quality time with my sister’s boys. Fishing a nearby lake and a tour of Brice’s Crossroads battlefield (which, actually, I think I enjoyed 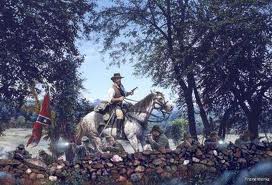 more than they did). But since it was the first time I’d seen them in a couple of years, it was fun to just sit back and watch them be themselves. It was also the first time I’d been back to the battlefield in at least 15 years or so – back when I was freelancing pieces to Civil War magazine. I wrote a piece on Gen. Nathan Bedford’s Forrest’s extraordinary victory at Brice’s Crossroads that happened to appear in time for an annual reenactment (to which I was fortunate enough to be invited to attend as a guest). It’s an unassuming little battlefield, in an unassuming corner of the state; maybe that’s what makes Forrest’s astonishing thumping of the Union army so, well, astonishing. If you’re ever in the area …

Also got a chance to attend a meeting of the Tupelo Film Alliance, which is pretty much what it sounds like. A confederation of sorts of Mississippi indie filmmakers, writers, actors, directors, etc. I picked up a lot of information on the subject of independent filmmaking, which can be summed up thusly, “You need a bunch of money.” So I’m not ready to declare either of my scripts (a short titled “The Things They Shouldn’t Do” and an adaptation of Enemy Within) a “project” yet, but it was definitely food for thought. Oh, and Elvis Bonus: the meeting was held at the Tupelo Visitor and Convention Bureau, which holds – in a glass case – two of Elvis’s jumpsuits (the blue one and the white one). No, not replicas. The Real Deal. I have to admit, it was pretty cool to be that close to The Real Deal. Through the TFA, I’ve also become recently acquainted with two Mississippi filmmakers, Glenn Payne and Michael Williams, from Tupelo and West Point, respectively. They just finished wrapping their latest project, “Genrevolt.” Check back for more on their Dead Leaf Productions in a later post. And check out the trailer right here.

Meanwhile, through all this I managed to eat my way up and down east Mississippi. My

hometown, Columbus, has seen a resurgence in the downtown area and restaurants are a key part of it. Killer lunches of real Southern food and cute waitresses who don’t even have to ask if you want sweet or unsweet tea. Café au Main was jammed for lunch when I went with yet another cousin (from my mother’s side), Joe Studdard, and I ate more at lunch than I usually do in a day. Down the street, Huck’s Place served up an equally tasty lunch, which I enjoyed amidst the company of the “Witches of Eastwick” (they know who they are) and it was cool to know that I went to school with the brother/sister crew that runs the place (thanks Huckaby clan). If you ever get a chance to stop in Columbus around lunchtime, don’t miss either.

And in case you’re wondering, of course I went to Shipley’s for the world’s best doughnuts. I’m not going to tell you how many times I went, though.

Yeah, I hated to leave, but like the former governor of California likes to say, “I’ll be back.”