Cameron Barnes in the National Theatre of Scotland’s production of “Black Watch,” presented at the Shakespeare Theatre Company. Photo by Manuel Harlan.

It has been said that the experience of combat is universal, regardless of the politics, the population, the ethnicity of the combatants or even the technology. The National Theatre of Scotland’s “Black Watch” proves that point in a gut-wrenching way.

I took in the play at the Shakespeare Theatre Company in D.C. over the weekend and walked away impressed, a little shaken and emotionally drained. And glad I had the opportunity to see what may be the best piece of storytelling art to come out of the war in Iraq.

Written by Gregory Burke, the award-winning play tells the story of 10 soldiers of Scotland’s Black Watch Regiment and their experiences in Iraq during Operation TELIC in 2004. In his “Writer’s Note” in the program he writes, in words reminiscent of the military tradition of our own heavily Scots-Irish Deep South, “There’s a pride in Scotland, romanticized perhaps, but a pride nonetheless about our military traditions. Scotland has always provided a percentage of the British Army that is disproportionate to its population’s size.”

This is not simply a recreation of combat scenes or overwrought depictions of veterans suffering from the after-effects of combat. The play is, for the most part, about everything but the actual fighthing. In fact, there is but one combat scene, and a very powerful one at that, near the end. What’s most effective about this seemingly small fact is that the amount of time the play devotes to fighting becomes a metaphor for the actual experience of war itself – the long periods of idleness, boredom and inanity before – and after – being propelled into the intense fear of combat.

Burke’s writing is outstanding – and his dialogue and interplay among the troops  is dead on. Yes, it may be hard to understand the brogue and the Scottish slang and dialect, but no matter. If you’ve ever worn a uniform and been deployed – and, honestly, even if you haven’t – you know what’s going and what they’re talking about. These are young men far from home, trying to get through another day as best they can.

Superbly acted – it’s hard to believe the actors aren’t real veterans – and visually stunning, the play incorporates movement, music, song, dance and audio-visual effects seamlessly into one rich storytelling experience. Director John Tiffany writes, “Fuelled by by variety, music and a deep love of storytelling, Scotland’s artists have created a form of theatre that is as significant and vital as its written drama.” 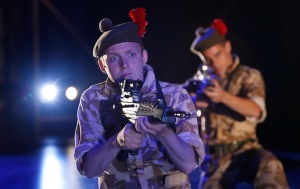 Ryan Fletcher in the National Theatre of Scotland’s production of “Black Watch,” presented at the Shakespeare Theatre Company. Photo by Colin Mearns.

There is an element of sorrow that runs through the play so strongly that I began to wonder if that wasn’t the point of the whole endeavor. With sublime subtlety, even elegance, Burke’s play slowly, inevitably breaks your heart. If the mail call scene doesn’t move you to tears, you are soulless. The fatalistic interaction of the men and their bafflement at a world out of control, save for the weapon in their hands, grabs you by the throat and reminds you that, regardless of the era or the reason, war is really this: scared boys trying not to get killed or lose their friends.

And in the end, they aren’t fighting for glory or country. As Burke notes: “They fight for their regiment. Their company. Their platoon. And their mates.”

UPDATE, 2 October 2012: Check out the Washington Post interview with the director here.