February is usually a double whammy month for me. Between two birthdays and Valentines Day and our usual bad Virginia weather (not to mention the end of football season), I can’t wait to get to March.

But it’s also a good time to stay indoors and catch up on reading and movies. With the pending release of Deep Blood, I’ve rejuvenated a lot of the connections I let slide while finishing the novel. And thanks to my friends at Goodreads — and an Amazon gift card — I’ve got a lot of new material to read.

At the moment, I’m reading an early John D. MacDonald novel, A Bullet for Cinderella. It’s one of his early, hard-boiled crime novels, certainly not his best effort. But reading MacDonald is always like running into an old friend — you pick up right where you left off. Next up will be a couple of books I’ve been meaning to get to for a while — Tom Franklin’s Smonk and Ed Lynskey’s Lake Charles (and his new collection of stories, Smoking on Mount Rushmore), both of which promise to be solid redneck noir.

Moviewise, I’ll be checking out Love and a .45 this weekend (you gotta love a title like that). Happened across it on Netflix. It’s an indie film starring Renee Zellweger and Gil Bellows, who play star-crossed lovers whose bungling bank robbery propels them into celebrity as fugitives on the run. I have no idea if it’s any good, but it caught my attention. I also recently watched Killer Joe, starring Matthew McConaughey, Emile Hirsch, Gina Gershon, Thomas Hayden Church and Juno Temple. It’s a movie hard to describe…but the word that keeps coming to mind is “lurid.”

The premise is an old noir one — a not-too-smart drug dealer, Chris (Hirsch) hires Killer 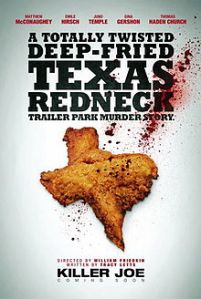 Joe (McConaughey), a Dallas cop who works as a hitman on the side, to kill his mother for the life insurance policy that, supposedly, names her daughter Dottie (Juno Temple) as the beneficiary. When Chris can’t front Joe the money for the hit, Killer Joe takes Dottie as a “retainer.” Double crosses and mayhem ensue. It’s directed by William Friedkin, and as usual, he pushes the limits of just about everything in movie-making. If you’re the least bit shy about language, nudity, sex and violence, don’t bother.

And if I get around to it, I’ll check out Michael Biehn’s latest tribute to the B-movie drive-in flicks of old, The Victim. But that’s another story.