Before I get into my favorite Southern novels, if you haven’t liked Deep Blood on Facebook, get over there and do it now. Also, for those of you who are interested and/or who have asked, I may have found a solution to “signing” e-books. Still working on that one, but check back soon.

Now, back to your regularly scheduled program…one of the cooler social media sites I spend time on is Goodreads, and if you’re a reader and haven’t checked it out, you should. It’s a cool spot for readers (and writers) to exchange books, ideas, conversation, etc. It’s also a good site to go to if you want to check out some reviews or buzz about a particular book.

One of the groups I frequent has to do with Southern fiction (I know, shocker), and the “best” Southern novels. Calling anything the “best” is always dangerous, but I’ve put together a list of favorite novels. I’m sure I’ve left something out that belongs on the list, so feel free to let me know in the Comments section below. In no real particular order:

To Kill a Mockingbird: I’ve written about this one before, but it still ranks as my all-time favorite. Harper Lee may have written the perfect Southern novel (and she must have known it, because she never wrote another one), as evidenced by her receipt of the Presidential Medal of Freedom and the Pulitzer Prize. Written way before its time, her story of Scout, Jem, Dill, Boo Radley and Atticus Finch is one of the greatest American literary achievements. Lee took Southern racism head-on and did so with a warm, funny and poignant story that holds up even today. And every man should be measured against the ultimate example of mature, noble, heroic manhood that was Atticus Finch (and could you imagine anybody else but Gregory Peck playing him in the movie?).

Father and Son: It’s almost heresy to claim a Mississippi writer other than William Faulkner as your major influence, but reading Faulkner didn’t fundamentally change my approach to writing. Larry Brown did.  A north Mississippi native who wrote like he lived — gritty, real and unblinkingly honest — Brown took everyday people that the rest of the country forgets about, doesn’t want to acknowledge or makes fun of and gave them humanity and even dignity. Father and Son is no different, even though it’s a redneck tragedy that, at times, reaches the profundity of Faulkner. Glen Davis is undeniably evil, and the path of destruction he causes in Brown’s revenge tale is breath-taking. You know how it’s going to end, but you can’t avert your eyes.

Light In August: I’ll be the first to admit that reading Faulkner is difficult for me. Always has been. And Light in August isn’t easy. Faulkner also took the outcasts and misfits and elevated them to display their dignity, and does so exceptionally well in his Gothic tale of Lena Grove, Joe Christmas, et al. It’s a tortured story of race, sex and alienation in the Deep South during the Depression. Dealing with poverty that is, at times, brutal and a race struggle that always is, Faulkner still manages to create sympathetic characters amid the violence and hate. There are other more accessible Faulkner novels, but this one, to me, is central to understanding not only the author, but the culture and time about which he wrote.

Deliverance: Yes, I know. You’ve seen the movie. “You got a purty mouth.” Now shut up. James Dickey’s first novel is a landmark novel, one of the most beautifully written books I’ve ever read. It’s easy to call it just a piece of redneck fiction — what happens when the city folk run up against some good ol’ boys out in the woods. But, Deliverance is one of those books that I enjoy so much that every time I read it, no matter how many times, it’s like reading it for the very first time. The city boys’ misadventure — with only the savvy Lewis Medlock as their protector (and at times antagonist) — becomes a metaphor for our basic human nature, our need, first, to control and subjugate everything in our midst, then our need to survive that which we can’t. 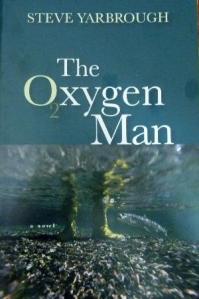 The Oxygen Man: Steve Yarbrough’s first novel is the story of Daze Rose and her brother, Ned, who works as the “oxygen man” for a local catfish farmer in Indianola, Mississippi. His job is to patrol the various ponds checking the oxygen level in each, a mundane, unglamorous job, the risk of getting snakebit notwithstanding. Ned and his employer are white, but all of his co-workers are black. But the lines between the races in this bleak, violent story are very blurry. When one of the ponds is ruined, the owner immediately suspects one of the three black men working with Ned. Yarbrough shines a harsh light on small town prejudices, Southern race relations and human nature and somehow makes this a tender tale.

Poachers: I’d never heard of Tom Franklin until I attended the Bread Loaf Writers Conference and spent a week listening to Tom’s critiques of my group’s fiction (including my own). At the time, he was the writer in residence at Ole Miss. Poachers is actually a collection of 10 stories, with the title story more like a novella. It’s redneck noir at its best, moved along by Tom’s simple, blunt prose (described by Publishers Weekly as “gruff grace”). He admits to being too sentimental, and it shows occasionally, but it’s offset perfectly by an unflinching look at human nature — the good and the bad. If you like Poachers, pick up Crooked Letter, Crooked Letter, where he really hits his stride.

Wise Blood: I first read this one when I was a junior at Ole Miss. My English professor, a young guy who had just come west from the University of Alabama-Birmingham, assigned  this book as the centerpiece of our literature study. I remember reading it and thinking, “I just don’t get it.” That might have been because of the blonde girl sitting in front of me, but that’s beside the point. Flannery O’Connor’s characters have often been called “grotesque” and her fiction exceptionally violent, and Wise Blood has elements of both. Hazel Motes comes home to Tennessee after World War II, living on a pension from never-explained (and thus suspicious) war wounds, and finds himself struggling to readjust to life after war. He’s descended from preachers, but his war experience has made him an atheist, and he begins to evangelize a bizarre kind of reverse religion — an anti-religion. He struggles with the concept of sex and salvation, and a host of other issues that come to the fore when he meets Lily, the teenage daughter of a traveling evangelist. Perceiving her as pure, he aims to corrupt her — until he learns she is a nymphomaniac, which kills his sexual desire for her. It’s a complicated story, with very complicated characters — and Hazel Motes’ disintegration over the course of the story is downright disturbing. I’ve read it several times since my junior year at Ole Miss, and it’s become one of those works of fiction that keep going back to.