One of my can’t-miss movies this summer is either going to be a complete badass cinematic experience or a total waste of time. I’m hoping for the former when World War Z makes it to the big screen. It has the potential to be the most epic zombie experience ever.

Brad Pitt leads a mostly unheralded cast (with the exception of character actor David Morse), but of course the true stars of this flick will be the zombies.

I haven’t seen a trailer for this yet (at least not in theaters), but I did read the novel of the same name, written by Mel Brooks’ son Max. It wasn’t unputdownable, and it’s certainly not going to be considered great literature anytime soon, but if you’re a fan of the genre — and the mythology — it’s a great read. World War Z, as the name implies, chronicles humankind’s greatest — and very nearly last — stand against the rampage of the undead. This isn’t a story of teenagers caught in a barn, or a dysfunctional group of Georgians blasting “walkers.” These zombies are global, border-jumping ravenous hordes. From sea to shining effing sea. Brooks eases some politics into the story, but not enough to distract you away from the human struggle to survive.

I suspect the movie will be huge, because the zombie fascination seems at an all-time high 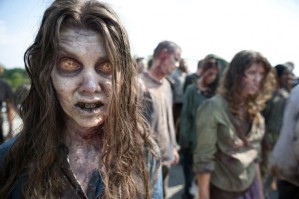 (turbo-boosted by “The Walking Dead”). Why do we like zombie movies (and now zombie novels, short stories, graphic novels, etc.) so much? I’m sure there are plenty of psychological reasons, and we could use words like “anthropology” and “entropy” in an academic discussion like these from Stanford and Penn State (yes, real scholarly discussions about zombies). There’s probably more than just a bit of truth in the statement: “In a way, survivalism has become a dominant mode of self-reference for a greater number of people … You see that in the obsession in apocalypse and disaster in the fictional stories we tell. Furthermore, it is not only the survival of ourselves as individuals that we are concerned with, but the survival of entire communities – even humanity as a whole.”

Yeah, I can see that. But, really, don’t we just enjoy blowing away the undead? Why? Here’s a couple of reasons: