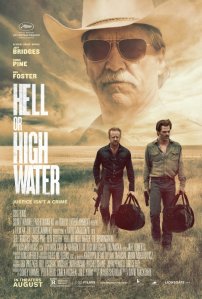 One of the most enduring mythologies in American culture is that of the romanticized gangster — especially the reckless bank robber of the Dust Bowl during the Great Depression. In this myth, a down-and-outer from the lower castes of our society brazenly lands a mighty blow against The Man (exemplified by the U.S. banking system), and his brashness endears him to the masses with whom he shares the burden of being put-upon and demeaned by a feckless society.

David MacKenzie’s Hell or High Water breaks little new ground in his updating of this myth, but his superbly acted morality play is easily the best movie of the summer.

From Rotten Tomatoes: Texas brothers–Toby (Chris Pine), and Tanner (Ben Foster), come together after years divided to rob branches of the bank threatening to foreclose on their family land. For them, the hold-ups are just part of a last-ditch scheme to take back a future that seemed to have been stolen from under them. Justice seems to be theirs, until they find themselves on the radar of Texas Ranger, Marcus (Jeff Bridges) looking for one last grand pursuit on the eve of his retirement, and his half-Comanche partner, Alberto (Gil Birmingham). As the brothers plot a final bank heist to complete their scheme, and with the Rangers on their heels, a showdown looms at the crossroads where the values of the Old and New West murderously collide.

Foster carries the torch of the wild-eyed bank robber of the Wild West days, but with a West Texas redneck charm instead of the suit-and-tie oiliness of Dillinger. And, unlike the outlaws of old, Toby and Tanner learn — up close and personal — that today’s populace, especially in Texas, isn’t intimidated by some asshole in a ski mask carrying a gun. As with most outlaws, Tanner’s volatility is a liability, and Foster stays on that edge of near-crazy even as he remains steadfastly loyal to his brother. He knows who — and what — he is and accepts his fatalistic view of the world with the aplomb of the condemned.

Pine steps away from the Star Trek enterprise as the “noble” one in the story (echoed in the tagline: “Justice isn’t a crime”). Faced with impossible odds after his mother’s poor financial decisions and/or the evil machinations of greedy bankers (perspective is everything), he makes even more dubious choices with a scheme that makes sense only in the world of noir: rob enough banks to get the money needed to save the family farm (and launder the money through an amateurish casino scam). He’s the brains behind Foster’s brawn, and he plays Toby as low-key as Foster plays Tanner’s manic psychotic. The brothers share a determination and a resoluteness of purpose, each on his path, and Pine earns, if not your sympathy, then certainly your empathy (because we all want to strike a mighty blow at The Man, after all).

Jeff Bridges proves once again why he’s a force of nature as the grizzled Texas Ranger Marcus, who is one very reluctant step away from retirement and stuck in a world of two generations ago as he incessantly rides his half-Indian partner (a brilliantly understated Gil Birmingham). When Alberto informs Marcus, “You do know I’m half Mexican, too, right?” Marcus laconically informs him that he has plenty of Mexican jokes he’ll get to after he’s used up all his Injun jokes. “And that,” he growls, “could take a while.” Which sets up a devastatingly poignant moment in which we learn that Marcus has a soul after all.  It’s a brief moment in the film, like a lit match that flickers out in high wind, but it serves as one of the most arresting moments of the movie.

HOHW is one of those movies that allow the actors to fully explore and embody the characters they play and show us exactly who they are, without a lot of special effects or explosions or gunplay. It’s a solidly crafted, engrossing film that,though it tries, isn’t really about the decay of the American economy or culture or the evils of the banking system. It’s really about desperate men making life-or-death decisions in desperate times and taking care of things on their own — come hell or high water.