When Graeme Macrae Burnet’s Man Booker Prize for Fiction shortlisted novel “His Bloody Project” was first released, it had an initial print run of just 1,500 copies.

Recommended Read (courtesy of Ron Earl Phillips over at Shotgun Honey): The Night Cyclist, by Stephen Graham Jones, a horror novelette about a middle-aged chef whose nightly bicycle ride home is interrupted by an unexpected encounter

Colson Whitehead is up for another literary honor, the Kirkus Prize for fiction. Whitehead’s acclaimed “The Underground Railroad,” a novel set during the Civil War, is among six nominees announced Tuesday for the $50,000 award. Whitehead’s book is also on the longlist for the National Book Awards and last month was chosen by Oprah Winfrey for her book club.

The inaugural Byres Road Book Festival arrives this September weekend with a celebration of the written word and a plethora of award-winning authors and innovative events. 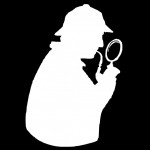 Lindsay Turpin retraces the steps taken by Sherlock Holmes author Arthur Conan Doyle as he penned his most famous work.