Very pleased to have been given this bit of news from Brash Books:

“Outside The Law is a winner in the tradition of Justified and Walking Tall. There’s right and there’s wrong and the no man’s land in between. Thompson explores them all, but it’s the reader who gets the big payoff in the end.”
–Reed Farrel Coleman, New York Times bestselling author of Robert B. Parker’s Debt To Pay

Novelist Carl Hiaasen: You can scream about injustice or you can use humor: Carl Hiaasen’s home state of Florida gives him a lot to laugh about. 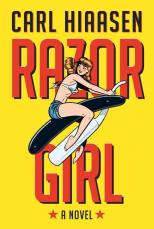 How to be a best-selling crime writer: “I like to think about the back of my head as a compost heap – you chuck everything in there and what survives is the really interesting stuff,” says award-winning author Val McDermid

Tana French’s novel ‘The Trespasser’ begs us to take crime fiction seriously: It has become increasingly clear that American-born, Dublin-based Tana French is the most interesting, most important crime novelist to emerge in the past 10 years.

Val McDermid on PD James: ‘She faced the darkness head on’: Like so many crime writers, PD James was drawn to her vocation out of love. Before she took up her pen, she was a keen reader of detective novels, and over her long career she remained fascinated by the so-called golden age that followed the end of the first world war.